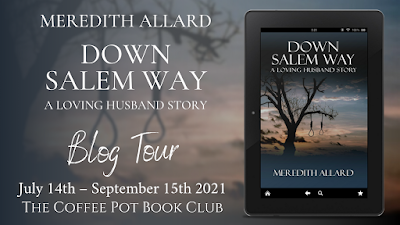 Down Salem Way
The Loving Husband Series
By Meredith Allard 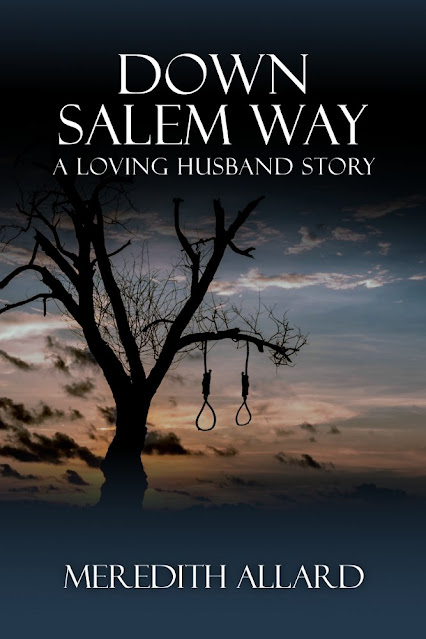 How would you deal with the madness of the Salem witch hunts?
In 1690, James Wentworth arrives in Salem in the Massachusetts Bay Colony with his father, John, hoping to continue the success of John’s mercantile business. While in Salem, James falls in love with Elizabeth Jones, a farmer’s daughter. Though they are virtually strangers when they marry, the love between James and Elizabeth grows quickly into a passion that will transcend time.
But something evil lurks down Salem way. Soon many in Salem, town and village, are accused of practicing witchcraft and sending their shapes to harm others. Despite the madness surrounding them, James and Elizabeth are determined to continue the peaceful, loving life they have created together. Will their love for one another carry them through the most difficult challenge of all?
Excerpt

I laughed. I was ready for the joke. Dear God, please, I begged in the silence of my mind, this has to be a joke. But I knew. No matter no matter. This was no joke. The man had come to take Lizzie away.

“Did you sign a pact with the Devil in your own blood? How long have you been a Witch?” The constable’s eyes blazed with haughty fire.

“I am no Witch, sir,” Lizzie said. I was proud of her. Her voice was strong, her back was straight, and she held the man’s eyes.

“I can assure you,” I said, “my wife is no Witch. What proof have you for such groundless accusations against my wife?”

“We know she’s a Witch because witnesses have spoken against her.” He turned to Lizzie. “Why don’t you confess?”

“I am no Witch, sir,” Lizzie said again. She backed into me, hoping, I’m certain, that I could protect her. Dear God, why could I not get her away sooner? Just one day sooner? I have been wanting to take Lizzie to England for as long as we have been married, but we are here and not there and now my wife is in Hell. I am in a different kind of Hell but tis Hell all the same.

Whatever turmoil I felt, as though my innards quivered and I would heave everything I had ever eaten, I had to hold myself together. When the pock-faced man showed us the arrest warrant where Lizzie was named, she sobbed. I put my arm round her waist. I would be her rock. I would keep her strong.

“I have a warrant for your arrest, Goody Wentworth, and you must come with me.”

“Mistress Wentworth,” I said in my most haughty tone, but what did such distinctions matter then? I tried to stop him from taking Lizzie but the man knew what he was about. He had done this many times before. When Father arrived I ran to him, shaking him, needing his help as I hadn’t since I was a boy. And then I remembered. Father is an affluent member of Society, a Selectman of the Church. Surely, he could do something.

Father watched the constable bind Lizzie in chains. Lizzie looked fluid, as though she melted away. She tried to pat the bump where our babe waits, but the irons were too heavy. I ran to her, and as she reached for me she tripped and I caught her in my arms. The constable jerked her away. My life, he took her away.

Father did what he could. “What business have you with Mistress Wentworth?” he yelled.

“I have a warrant for her,” the pock-faced man said.

Father grabbed the paper and read it. He shook his head. There was nothing he could do. I raged at the pock-faced man. I promised Lizzie I would never leave her ever and twas up to me to put an end to this.

The constable grinned. “If you know the Bible so well then you also know 1 Peter 5:8.” He waited for my response, but my mind was blank. Father knew.

“Be sober, be vigilant, because your adversary the Devil, as a roaring lion, walketh about, seeking whom he may devour.”

“And from Exodus?” asked the constable. Father slumped forward. “Thou shalt not suffer a Witch to live.” “My wife is no Witch,” I said. “She is an innocent woman. Please. Let her go and we shall leave here and never return.” 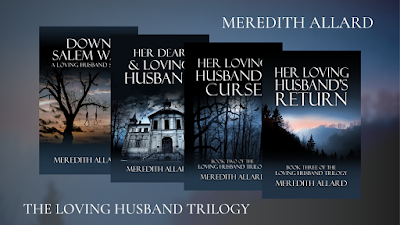 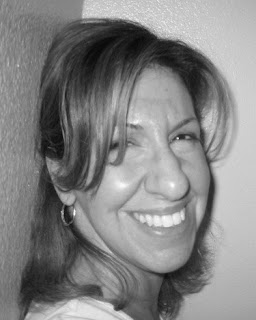 Meredith Allard is the author of the bestselling paranormal historical Loving Husband Trilogy. Her sweet Victorian romance, When It Rained at Hembry Castle, was named a best historical novel by IndieReader. Her nonfiction book, Painting the Past: A Guide for Writing Historical Fiction, was named a #1 New Release in Authorship and Creativity Self-Help by Amazon. When she isn’t writing she’s teaching writing, and she has taught writing to students ages five to 75. She loves books, cats, and coffee, though not always in that order. She lives in Las Vegas, Nevada. Visit Meredith online at www.meredithallard.com.
Social Media Links:
Website, Facebook, LinkedIn, Pinterest, BookBub, Amazon Author Page 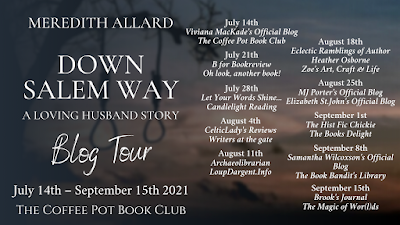